HAVE WE NOW LOST OUR ARMED SERVICES TO THE EUROPEAN UNION?… 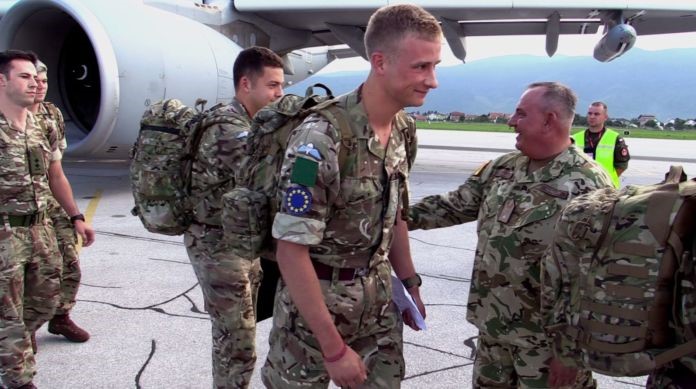 …and our leading Brexiteers are unwilling to talk about it.  Why?  What is REALLY going on here?

The military unification of our Armed Services with the European Union is actually happening, at an increasing rate, even though we are now meant to be months away from leaving the EU.   Politicians on both sides of the Brexit Debate are doing absolutely nothing about this, and neither is the campaign group Leave Means Leave.

What IS this PESCO process?  It stands for Permanent Structured Cooperation.  Its purpose is to unify the military command and control elements of the different EU member states into one unit that comes under the direct command of the European Union.  And – virtually unknown to the British people – this process includes our own Armed Services, despite our Referendum vote to leave.

Why is TM siding with the Brussels thugs, who clearly intend to asset-strip our country? We will lose our nation’s ability to defend itself? I don’t think so.  We can also be dragged into a war not of our making? No thank you.  This is High Treason!

Since 1952, a European Union ‘Superstate’ has been planned, with the ability to project its own military power and capabilities. The PESCO process will also see the UK lose control of its defence procurement, industry and training – all unbelievably serious – our country, very soon, will be defenceless, no longer independent or sovereign.

Why the reluctance of our elected politicians to confront this?  The mind-set which created and now controls the European Union also controls the City of London…and the City of London thinks it controls Parliament. We are talking about what is sometimes referred to as the ‘Deep State’ – an elitist grouping of unelected and unaccountable financial and corporate oligarchs who meet in secret, unlawfully controlling the world’s money supply, and most of the world’s leading politicians (point of interest – four of Leave Means Leave’s main supporters actually worked for N.M. Rothschild).

So, is this Leave Means Leave campaign batting with a straight bat?  Is there a giant deception plan going on here, that we, the people, do not know about?

Surely we can see that the historical status of Common Law is utterly meaningless to these self-important parasites in Westmonster. Which of them do we think could EVER actually deliver on the Referendum decision of the electorate? This is another glaring example of arrogant duplicity.

Make your voice heard today – ask your MP to explain the PESCO process!

Ask them what has been done so far?  Ask them what they, personally, are going to do about it?  Don’t let them off the hook!

Send for further details on stopping the rot – ‘info@livingstones.uk’

Born in a stone-flagged under-dwelling, in an obscure Yorkshire village. Funded for grammar school by my aunt, worked variously in HM Customs, the London Met Police and switched careers into fire-resistant glazing in 1984. Back in 1974, like C.S. Lewis, I had come to the conclusion that 'Christians are wrong, but all the rest are bores'. Worked for a spell in Israel, and understood why the 'Austrian asylum-seeker''s final solution did not succeed. Confronted now with the practical outworking of the Coudenhove-Kalergi Plan, I see that my country has been sleep-walked into the undemocratic oligarchy of Brussels. My country is too rich in noble history to remain subordinate to these malevolent souls with hearts blacker than a witch's hat. The Rastafarian motto comes to mind - 'those who are in earnest are not afraid of consequences.' Our country needs a leader (man or wombman) with the heart of a LION, and, love him or loathe him, there is no-one else who has faced down these conspirators for over 20 years. At the Brexit Party rally in Huddersfield I was convinced by Ann W as much as anyone - a root-and-branch change back to true local democracy is the only way. View all posts by Andrew Livingstone