Good morning, fellow Brexiteers! If you get time, do download the pdf at the foot of this post.

It’s an analysis of the GE 2017 results, with the names of the current 274 Brexit Party PPCs shown alongside their respective constituencies for December 12th. I’ve put it up so that we can each keep a sharp eye on our local constituency, and spot any renegers. There’s a note opposite each of the present 650 incumbents, showing what they were saying about LEAVING, about the dreadful TM Withdrawal ‘deal’, and which of the Tory Blues voted ‘No Confidence‘ in the midst of her struggling and juggling.

You will all know what to do next.

Anyone who regularly follows the work  of Ian R. Crane will be aware about the MHRA-led persecution of the directors of Immuno-BioTech Ltd, and the lengths to which the MHRA has gone to stifle and silence the news about a successful, serous, non-invasive CURE for many cancerous tumours.

In the course of their 10-year commitment to develop the Gc-MAF material, the company had improved and refined their product to the point where it is now possible to CURE up to 120,000 Stage IV tumours per year, showing an 89% success rate.

I would ask readers to look at a comparable situation across in the USA. There is at present a video on YouTube where Robert O. Young has used a successful, non-invasive treatment for a type of Lung Cancer. This man has ALSO been rewarded for his work with  a term of imprisonment. However, as bad as that is, we hear from his testimony before the International Tribunal for Natural Justice [ ITNJ ] that the term of his imprisonment was falsely advertised (via Wikipedia) as having been 3 years and 7 months, whereas, actually, Robert O. Young served only FIVE months in custody??

Now, we might suspect that this (can I call it ‘false flag’) misinformation was not accidental. If not accidental, why is it there for public access? My first reaction is to get both Ian R. Crane and David Noakes, whose cause many have been supporting for several months now, to confirm that the facts about HIS personal detention and that of Lyn Thyer, reported to be presently fasting to her death in a foul French jail, are ACTUALLY true. (Not that I, personally, doubt those statements for a moment) , we need to ask just how deeply has the REAL CANKER of capitalist conspiracy actually penetrated into our Tory-led society.

At a time where we are struggling to extricate our nation from the clutches of Brussels EU, are we actually being asked to put our faith in a government which seems determined to deliberately mislead the electorate? Jeremy Hunt was in charge of the Department of Health when the Crown Persecution Service was allowed to render Lyn Thyer over to French custody under a EUROPEAN ARREST WARRANT – no charges preferred against the lady (guilty until proven innocent applies over here now, which is why she is being held in a French jail, fasting to the death, where her incarceration will not incur national comment or condemnation, since the  French people have long lived under that odious concept). This character Hancock, who has now picked up the reins from HUNT for matters ‘health’, has not exactly gone out of his way to rescind the decision on Lyn Thyer, has he? David Noakes is ALSO awaiting his turn for rendition into French custody.

It really IS time to get that Westmonster swamp dried out, to get our society back onto on solid, reliable rock, away from the EU’s brick by brick BABEL , and to rebuild democracy here where we were once founded upon TRUTH and not on GREED. I wonder which of the present contenders for the keys to number TEN could we trust to make any change for good and forever?

Here are just some of the benefits in having a Direct Democracy. It could save us and the world we live in. None of your presently elected Political representatives will encourage you in this line of thought, so it will be up to all of us to advocate this as much as possible.

Terrorism and the world’s refugee crises can also be eliminated as we shift our focus to providing everyone’s needs instead of catering for the few that profit from wars. [See http://livingstones.blog – SWFQW] **

These are just some of the improvements we will see. Let me know if I left something out – We are all in this together. Love, Peace and Unity!

Currently reading an interesting Paper on the search for True Democracy written by Roger Peach, where the writer traces the concept and practice of ‘democratic governance’ from its roots in the history of Athens, around 500 years BC, through to the present bastardization of the concept, a flagrant display of which is currently being played out inside the crumbling limestone of the Palace of Westminster.

Not only did the ‘Greeks have a word for it’, they also had a clever device ( a ‘kleroterion‘ to ensure impartial ‘fair play’ in the selection of their officials.. 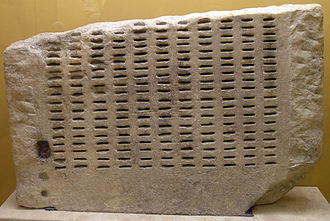 A kleroterion in the Ancient Agora Museum (Athens)

In governance, sortition (also known as selection by lot, allotment, or demarchy) is the selection of political officials as a random sample from a larger pool of candidates,[1] a system intended to ensure that all competent and interested parties have an equal chance of holding public office. It also minimizes factionalism, since there would be no point making promises to win over key constituencies if one was to be chosen by lot, while elections, by contrast, foster it.[2] In ancient Athenian democracy, sortition was the traditional and primary method for appointing political officials, and its use was regarded as a principal characteristic of democracy.[3]

Athenian democracy developed in the 6th century BC out of what was then called isonomia (equality of law and political rights). Sortition was then the principal way of achieving this fairness. It was utilized to pick most[5] of the magistrates for their governing committees, and for their juries (typically of 501 men). Aristotle relates equality and democracy:

Democracy arose from the idea that those who are equal in any respect are equal absolutely. All are alike free therefore they claim that all are free absolutely… The next is when the democrats, on the grounds that they are all equal, claim equal participation in everything.[6]

It is accepted as democratic when public offices are allocated by lot; and as oligarchic when they are filled by election.[7]

In Athens, “democracy” (literally meaning rule by the people) was in opposition to those supporting a system of oligarchy (rule by a few). Athenian democracy was characterised by being run by the “many” (the ordinary people) who were allotted to the committees which ran government. Thucydides has Pericles make this point in his Funeral Oration:

“It is administered by the many instead of the few; that is why it is called a democracy.”[8]

The Athenians believed ‘sortition’ to be democratic but not ‘elections’[5] and they used these complex procedures – with purpose-built allotment machines (kleroteria) – to avoid the corrupt practices used by oligarchs to buy their way into office. According to the author Mogens Herman Hansen the citizen’s court was superior to the assembly because the allotted members swore an oath which ordinary citizens in the assembly did not and therefore the court could annul the decisions of the assembly. Both Aristotle[5] and Herodotus (one of the earliest writers on democracy) emphasize selection by lot as a test of democracy,

“The rule of the people has the fairest name of all, equality (isonomia), and does none of the things that a monarch does. The lot determines offices, power is held accountable, and deliberation is conducted in public.”[9]

Past scholarship maintained that sortition had roots in the use of chance to divine the will of the gods, but this view is no longer common among scholars.[10] In Ancient Greek mythology, Zeus, Poseidon, and Hades used sortition to determine who ruled over which domain. Zeus got the sky, Poseidon the sea, and Hades the underworld.

In Athens, to be eligible to be chosen by lot, citizens self-selected themselves into the available pool, then by lotteries in the kleroteria machines. The magistracies assigned by lot generally had terms of service of 1 year. A citizen could not hold any particular magistracy more than once in his lifetime but could hold other magistracies. All male citizens over 30 years of age, who were not disenfranchised by atimia, were eligible. Those selected through lot underwent examination called dokimasia in order to avoid incompetent officials. Rarely were selected citizens discarded.[11] Magistrates, once in place, were subjected to constant monitoring by the Assembly. Magistrates appointed by lot had to render account of their time in office upon their leave, called euthynai. However, any citizen could request the suspension of a magistrate with due reason.

With a hat-tip to Roger Peach for his excellent research.

Acknowledgment to Wikipedia for information on ‘sortition’ .

Attached is a 13-page pdf, which lists every MP by Party and by their VOTE on 23.06.16 in the Referendum. It might have slipped your mind that there were several of David Cameron’s cronies who actually voted to LEAVE. Odd really, that none of those was invited to pick up the baton to complete what DC had so definitely promised to do for the electorate.

Now, we are being invited to trust that this latest liaison between Marmite Man and BoJo will take us where we LEAVERS believe we should be – away from and OUT of Brussels EU. The arrangement is simple, perhaps a bit simplistic, but it is this:

Tory incumbent in your constituency voted LEAVE – give him your vote.

Tory incumbent in your constituency voted REMAIN, check him/her out as to what she intends to do, and vote accordingly. There are 650 seats up for grabs, and NPF has said he will not ask a Brexit PPC to stand where the present Tory incumbent is a LEAVER.

Labour incumbent in your constituency voted LEAVE (I think there were just 10), check him/her out as to what she intends to do, and vote accordingly..

Labour incumbent in your constituency voted REMAIN, both Tory and Brexit voters will support the BREXIT PARTY candidate.

Footnote: Is the solitary SNP MP, who dared to vote LEAVE, still alive?

Where we find that any MP is tempted to renege , there should be serious consequences. No, it’s not ideal, but it gets us out and potentially puts many Brexit-hearted people on the green benches, where we are in a better position to hold BoJo’s feet to the fire.