Those of us who are deeply concerned that a company can strive for ten years to perfect a cure for a great many cancerous tumours, only to find themselves been stamped on from a great height, have reacted positively to protest and to support the victims of the corporate injustice, whilst at the same time throwing the spotlight upon the miscreants.

I am told by a co-worker this morning that the video clip which explains to the world what has been deliberately hidden from us for the past 25 years has been TAKEN DOWN from the YouTube system, and consigned to the dustbin of oblivion – THEY THINK.

The other relevant link seems, so far, to have survived:

https://gcmaf.se/how-gcmaf-works/
The GcMAF Conference 2013 showed GcMAF is a far more powerful molecule than thought, both in terms of the science, and doctors’ results. In stage 4 cancer, some doctors who use the full protocol, listed on “Treatment Strategies,” are saving every patient (if they have not had chemotherapy.)
However, as the remainder of our A5 flyer is still relevant, we will continue to hand it out at rail-stations and bus terminals.
We have today been advised that it would be unwise for the ‘government’ to permit the manufacture of a product which, (without invasive surgery or electronic application), can actually succeed in 89% of cases, compared to the miserable ‘success’ rate of the Big Pharma’s regimen of chemo- and radio-therapy – 2.1%, where ‘success’ is reckoned as prolonging the patient’s (Latin word = ‘suffering’) life for an average of 2 months. Then, apparently, every Tom, Dick or Harry would be trying to climb aboard the financial merry-go-round.
For my part, I would be encouraged if Thomas, Richard and Harold were to get together and strive to produce a protein-based product which could ACTUALLY make serious inroads into this scourge which is blighting thousands of lives annually.
We must not, seemingly, impede the Big Pharma juggernaut, whose odious intent is to continue charging out to the National Health Service (you know, the one which was designed to be ‘free at the point of need’) their foul ‘therapy’ at £40,000 per sufferer per course of ‘treatment’. Sales of the Gc-MAF serum (which was available at around £400 per cure) are now totally blocked here in the UK. You do the maths..
I refer, of course to the political persecution of the employees of Immuno-BioTech Ltd, who find themselves facing 10- and 12-year prison sentences – in France – (why there, do you suppose?) thanks to the misuse of the EU’s damnable Arrest Warrant.
Unheralded, our cherished status of ‘innocent until proven guilty‘ has been replaced by that which has long been the blight of French society – ‘guilty until proven innocent‘ and few, if any of us, are saying a word about it.
Both Messrs Hunt and Hancock cannot have been unaware that this persecution by the Medicines & Healthcare Regulatory Agency [MHRA] was occurring. Just another reason to view with the deepest suspicion what is being pumped out by Boris Alexander de Pfeffel Johnson. If that man were to succeed in extricating the UK from the Brussels bog, he might just convince the electorate that their miserable ‘Old Sarum’ party was worth another hearing, but I am not holding my breath.
I would be reassured if his next step were  then to get the ‘conviction’ given to David Noakes annulled and to repatriate the bio-chemist Lyn Thyer from that French jail.
Perhaps, like us, you will write to (or, better still, visit) your current Member of Parliament and ask them how they feel about withholding a cure from thousands of cancer victims.
We also urge you to write to the brand-new ‘Justice’ Minister, Robert Buckland QC for his assistance in these two cases. He can’t really be too casual about his response, after all, he enjoyed only a slim majority of 2,464 at the last General Election. I can think of a competitor party who would be only too happy to contest that South Swindon seat.
Before you go, we recommend to you an £8 investment via Amazon of the very angry book – the testimony of a lady in the USA – Teri Davis Newman – whose life was saved from a 100% fatal cancer when David Noakes sent her the serum free of charge. The content is detailed, often very technical, and she was so angry that she forgot to get the pages numbered, but her book is living proof that Gc-MAF does really work. More than 11,000 people have taken the serum and more than 9,000 have survived with side effects no greater than a few cold-like sniffles. 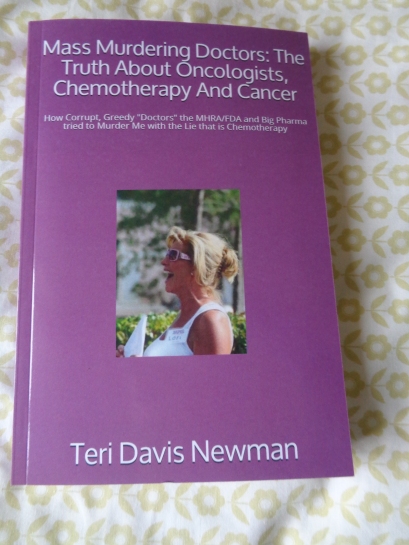 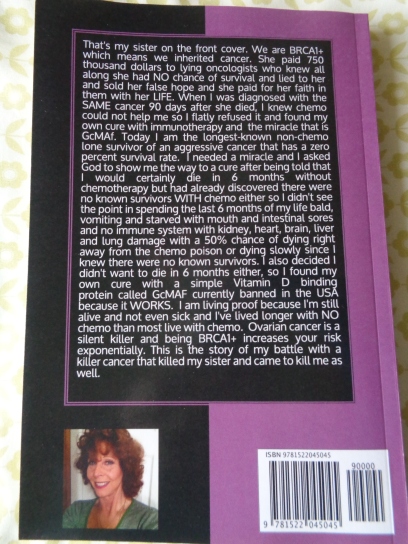 Born in a stone-flagged under-dwelling, in an obscure Yorkshire village. Funded for grammar school by my aunt, worked variously in HM Customs, the London Met Police and switched careers into fire-resistant glazing in 1984. Back in 1974, like C.S. Lewis, I had come to the conclusion that 'Christians are wrong, but all the rest are bores'. Worked for a spell in Israel, and understood why the 'Austrian asylum-seeker''s final solution did not succeed. Confronted now with the practical outworking of the Coudenhove-Kalergi Plan, I see that my country has been sleep-walked into the undemocratic oligarchy of Brussels. My country is too rich in noble history to remain subordinate to these malevolent souls with hearts blacker than a witch's hat. The Rastafarian motto comes to mind - 'those who are in earnest are not afraid of consequences.' Our country needs a leader (man or wombman) with the heart of a LION, and, love him or loathe him, there is no-one else who has faced down these conspirators for over 20 years. At the Brexit Party rally in Huddersfield I was convinced by Ann W as much as anyone - a root-and-branch change back to true local democracy is the only way. View all posts by Andrew Livingstone